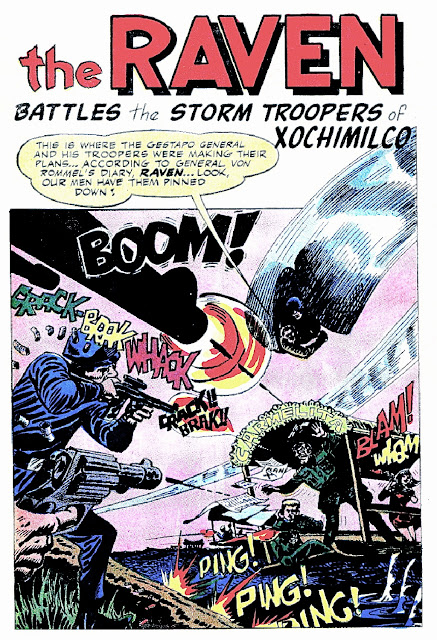 T.H.U.N.D.E.R. Agent Raven's assignments, with a  very few exceptions, were kept separate from those of his cohorts, Dynamo, Lightning and NoMan. His solo adventures, prior to a sleek redesign by Gil Kane, were controversially handled by veteran comics artist Manny Stallman whose style was considered old-fashioned and over-the-top by the hip sixties. Having learned to respect him via some better work for Warren during this same period, I've re-evelauated his goofy Raven stories…and I like them! Surprised the heck out of me! 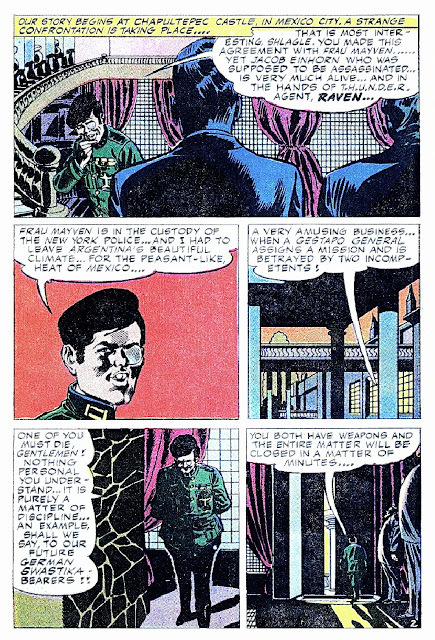 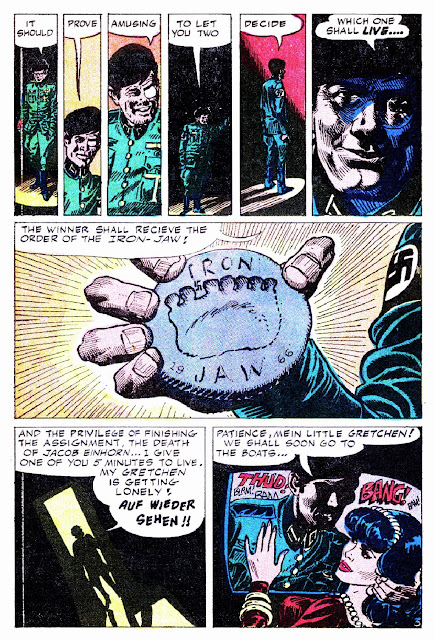 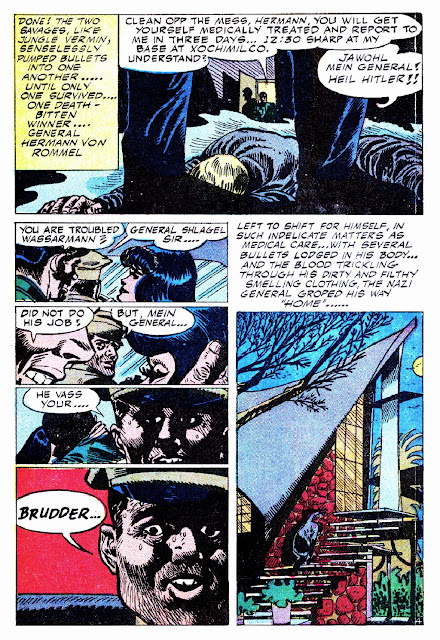 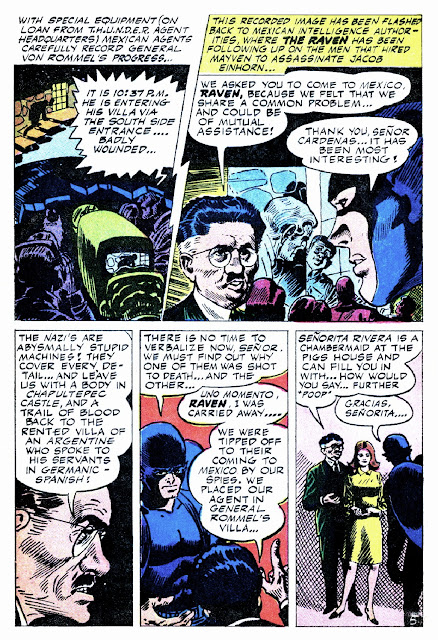 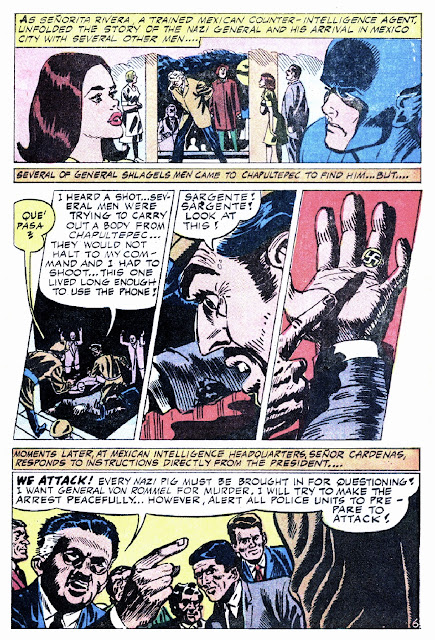 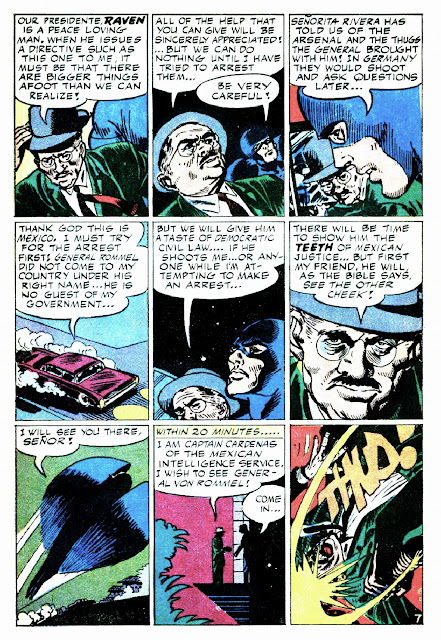 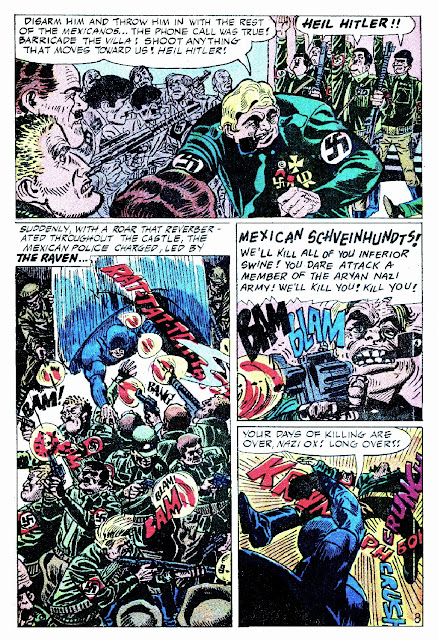 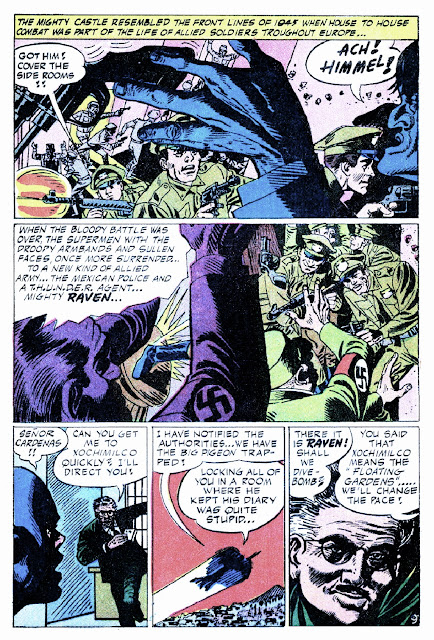 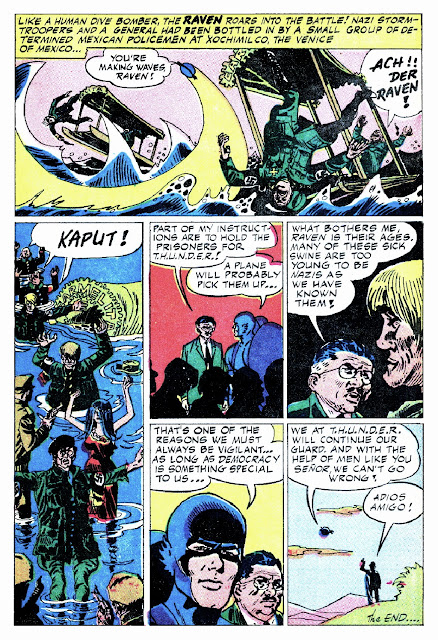 This was and remains the only Raven story that I ever read.

As a child, it struck me that there wasn't much story here, and that it read like some sort of strange propaganda piece, as if there were some felt need to convince us that the Mexican federal state were anti-Nazi.

I recall being somehow informed that Stallman's art were considered controversial.

I'll mention in passing that I think that the pipe of the officer in 8:1 and 8:3 (General Hermann von Rommel?) was inspired by the corn-cob pipe of George Lincoln Rockwell (which, in turn, was in imitation of that of General Douglas MacArthur).

I recall when Stallman died, Mark Evanier did an obit in his POV column for CBG. It included the top 2 tiers from page 3 of this story.
I think I mentioned this in one of your other blogs: Evanier recalled what an all-around nice guy Stallman was. He drew many stories for the comic book given away at Big Boy restaurants. When a Big Boy executive passed along a letter from a customer complaining about his art, Manny cried.

I think the key to understanding the two Raven vs. Nazis stories is to know that Manny was passionate about wanting to promote acceptance between people of different nationalities, races, and religions. In fact he spent a good part of his later years trying to interest publishers in a comic for kids dealing with what was then called "tolerance." Sadly it never came to be.

These two Raven stories address those themes. Manny was concerned that "defeated" ideologies like Nazism kept popping up again. Nazism was making a comeback in the 60s, so it makes sense he'd do anti-Nazi stories. I wouldn't be surprised if Cardenas' somewhat propagandistic speeches arose from a desire to present an intelligent, competent, and committed Mexican character to counterbalance the Mexican stereotypes that were still rampant at the time.

That said, Manny himself drew upon well-worn comics stereotypes. In the other Nazi story an Irish cop and a Jewish Nazi-hunter learn mutual respect. The two men are classic 1930s-style archetypes--the cop even wears a derby and a loud suit and says "begorrah." But that's a time thing, I think. Most of us tend to write and draw the world we knew when we were growing up. It's sort of like the way Jack Kirby's New York was always the 1930s New York of his youth.

The first Stallman I saw was his drawings for the Warren stories you were talking about, and from the time I was a child looking at those, I valued the atmosphere of the stories Manny did for Warren. It may not have been as "correct" as some of the other artists' work, but in terms of mood, character and basic interest, it was the equal of the work of two other great individualists working for Warren around this time, Steve Ditko and Jerry Grandinetti.

When I eventually saw the THUNDER Agents books, in the mid '70s, I thought his art was definitely the most vivid and idiosyncratic work that was done for Tower. I don't find it old-fashioned at all. In fact, what I am seeing when I look at the Tower work is something very much like film story boarding. And that top tier of page 3 of the Raven story you reproduce here invokes Krigstein, I'd say. The panels may not be subdivided to as sharp an analytical purpose as Krigstein's. But he was clearly not just phoning this work in; he was pushing himself as an entertainer and communicator.

As far as him drawing somewhat hackneyed types, this is the same stuff Krigstein -- speaking of Krigstein --said he hated about Eisner in his early '60s interview with Benson and Stewart. Although I like Krigstein an awful lot, and generally agree with his pronouncements, I side more with Eisner on this particular point, and so, more with Stallman. I like it when an artist knows exactly how he would draw anything on earth he can think to draw. It might be a prison and creative dead end if you are too young when all your types set in a concrete habit of hand. But I believe an older artist knowing exactly what he is about -- having his symbols and signifiers set -- so he can say what he needs to say without having to start at protoplasm every time, is a very good thing, maybe the clearest and most inevitable impression experience makes on their work.