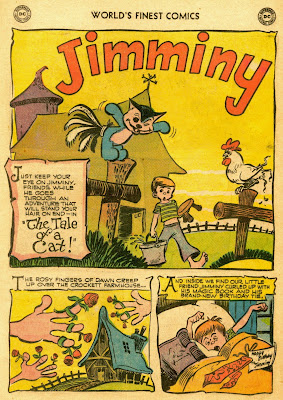 JIMMINY AND THE MAGIC BOOK was a wonderful but short-lived kids feature that filled out the final issues of National's long-running MORE FUN COMICS in 1947. Jimminy had this magic book, you see, that could lead him into surreal adventures! Speaking of surreal, the strip was created by Jack Mendelsohn who would go on to do the truly odd JACKY'S DIARY newspaper strip (and comic) as well as be credited as co-screenwriter for the Beatles' YELLOW SUBMARINE. Co-creator of the series was Howie Post. a young cartoonist then still in his Walt Kelly phase. Post would go on to years of Harvey's HOT STUFF as well as DC's fondly remembered Silver Age cave boy, ANTHRO.
All that said, what most fans DON'T know is that JIMMINY had one final appearance and you see it here today! Most likely left over from the cancellation of MORE FUN seven years earlier, this delightful 1954 JIMMINY (note the absence of the book in the title. It does cameo in the story, though) appeared as a throwaway story in the final fifteen cent oversized issue of WORLD'S FINEST. 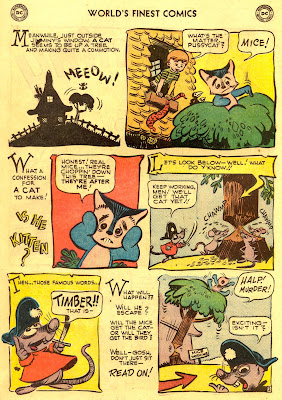 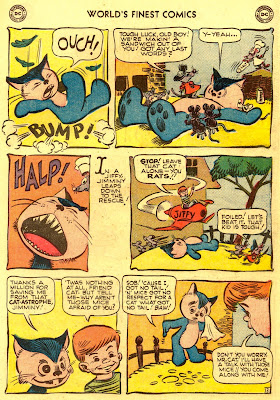 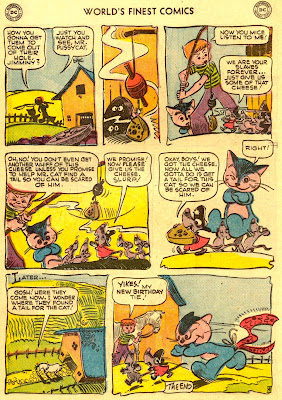