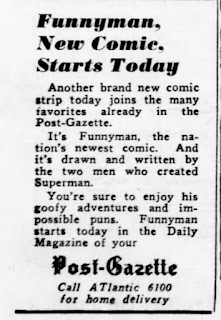 Here we see Siegel and Shuster's famous failed second act. After creating the world's greatest superhero and with him, pretty much the industry itself, Jerry and Joe were sadly never able to recapture the lightning. Joe's eyesight was pretty bad by this point and the strain of a a 7 days a week strip was just not something he was capable of handling so various assistants helped with FUNNYMAN, including Dick Ayers.What we have here is the first month of the daily strip which was actually much better than the comic book version of the character's adventures. The Sunday strip was a separate continuity.

I am a huge Funnyman fan,and want to know where you got these strips? Have they been reprinted?

Got 'em from the POST-GAZETTE (see above) via the online Newspaper Archives site. I purchased a monthly access subscription for my genealogist wife a while back and it's proven an invaluable research source to me as well.